TİM Chairman Gülle: Our Women Will Be The Architecture Of 'Türkiye Rising With Export'

TİM Women's Council, which operates within the Turkish Exporters Assembly (TİM), has signed a new study to further engage women in the economy and export. The Council launched a survey to implement important projects targeted with its new work, to reach the number of female exporters in Türkiye, and to bring female exporters to the TİM family. TİM Chairman İsmail Gülle, who called for participation in the survey, said, "We support our female entrepreneurs and business people at all levels of export. With this study, more female exporters will be reached, projects will be developed, needs will be determined and solutions will be presented. Our women will be the architects of 'Rising Türkiye with Export'. With the dedication and hard work of our women, we will set new records. A stronger economy is possible with our women being more effective in export."

Turkish Exporters Assembly (TİM) announced the export figures for July. Türkiye's exports in July reached 16 billion 413 million dollars with an increase of 10.2 percent compared to the same month of the previous year, despite the decrease in the number of working days of the Eid holiday. This figure was also the highest July export in the history of the Republic of Türkiye. For the first time in 12 months, the export family has surpassed $200 billion and made history with $201 billion and $46 million. On July 16, a daily export record was set at $1.5 billion.  While 18 sectors increased their exports last month, the Automotive sector ranked first with the export of 2 billion dollars. The sector with the most remarkable increase was Steel, which increased its exports by 709 million dollars compared to the previous year. Exporters flying the Turkish flag in 213 countries and regions succeeded in increasing their exports to 128 countries. Seven countries, including Greece and Portugal, set a monthly export record. The automotive sector has increased its exports to the UK by 63 percent.  The steel industry has tripled its exports to Italy. İstanbul's chemical products sector exports to Greece have increased 7 times to $80 million. 52 provinces increased their exports; According to the declarations filed with Turkish Lira, a total of TL 4.6 billion was exported to 173 countries. For the first time since New Year's Day, the number of exporting companies was 10,598. TİM Chairman İsmail Gülle said, “For the first time in our exports, which have been at the levels of 100 billion dollars for the last 14 years, we have exceeded 200 billion dollars in 12 months. Thus, we managed to exceed not only our 2021 target of $184 billion but also the 2022 target of $198 billion. Now we have our eyes on the 2023 target. Our current upward momentum shows that we will reach $300 billion in exports together in 5 years at most. We have the infrastructure and experience to achieve this. In this sense, today, it is a critical threshold for Turkish exports. Today, it is an important turning point in Turkish exports. The strong increase in our exports will both lead our country to a strong growth figure in the second quarter and further reduce the current account deficit.”

The Turkish defense and aviation sector has become the world's favorite with its high-tech products and systems in recent years. While exports of products produced by national facilities, including unmanned aerial vehicles, increased significantly this year, the sector exported $1 billion 341 million dollars in the first half of the year, up 45 percent. In the first 6 months, the sector succeeded to fly the Turkish flag in 169 countries, including the United States, China, France, and Russia. 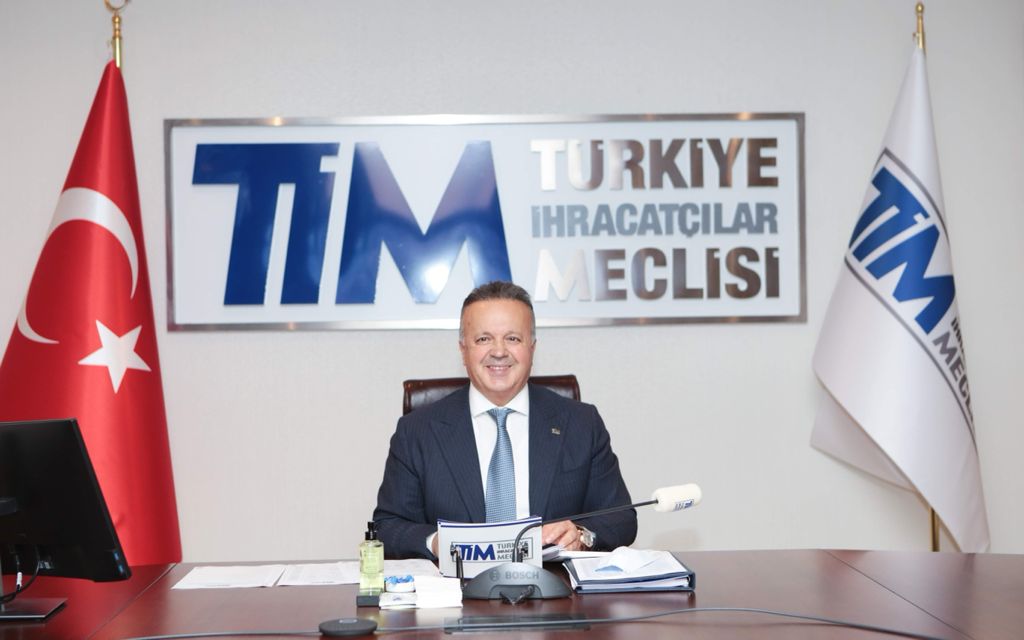 Turkish Exporters Assembly (TİM), which produces projects that will carry Türkiye safely into the future, takes another important step with its "Climate Talks" series. Ambassador Nikolaus Meyer-Landrut, head of the EU Delegation to Türkiye, participated in the first program, which will contribute greatly to the increase of climate awareness. 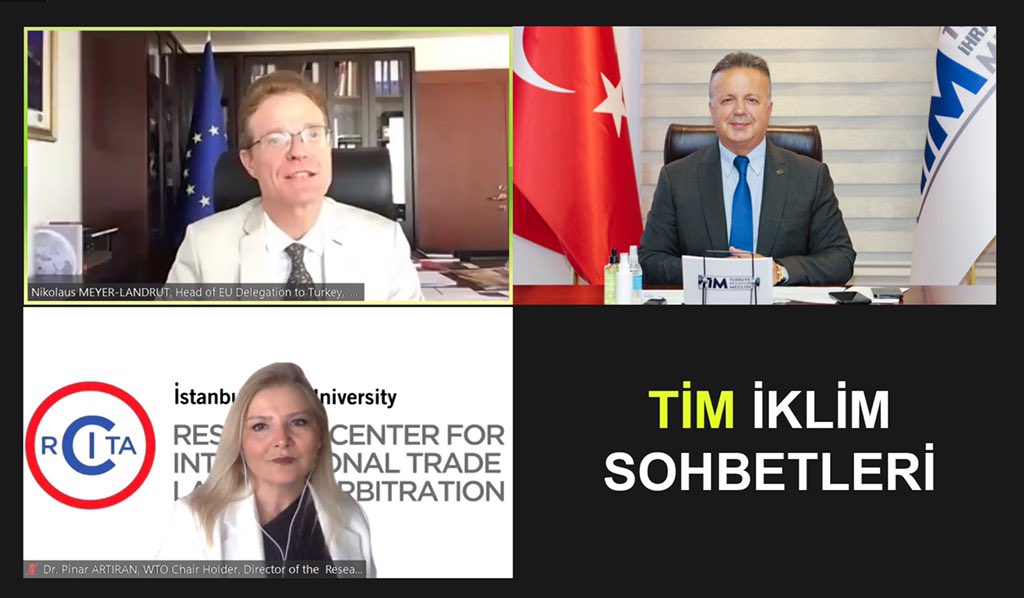 TİM Chairman Gülle: Exporters Shown with Records the Continuation of the Nation's Slap to the Traitors

Speaking on the 5th anniversary of the epic struggle of the nation against the 15 July military coup d'état attempt, TİM Chairman İsmail Gülle said, "Just as the people did not think for a moment to return, we continued to fight tirelessly as exporters on the morning of the same day. Exporters had shown with records the continuation of the nation's slap to the traitors. In 2016, our total exports amounted to 149 billion dollars. We completed 2019 before the pandemic with an increase of 21 percent to over $180 billion. Our exports have increased by 33 percent since 2016 despite the pandemic. This year, hopefully, we will exceed the level of $200 billion." 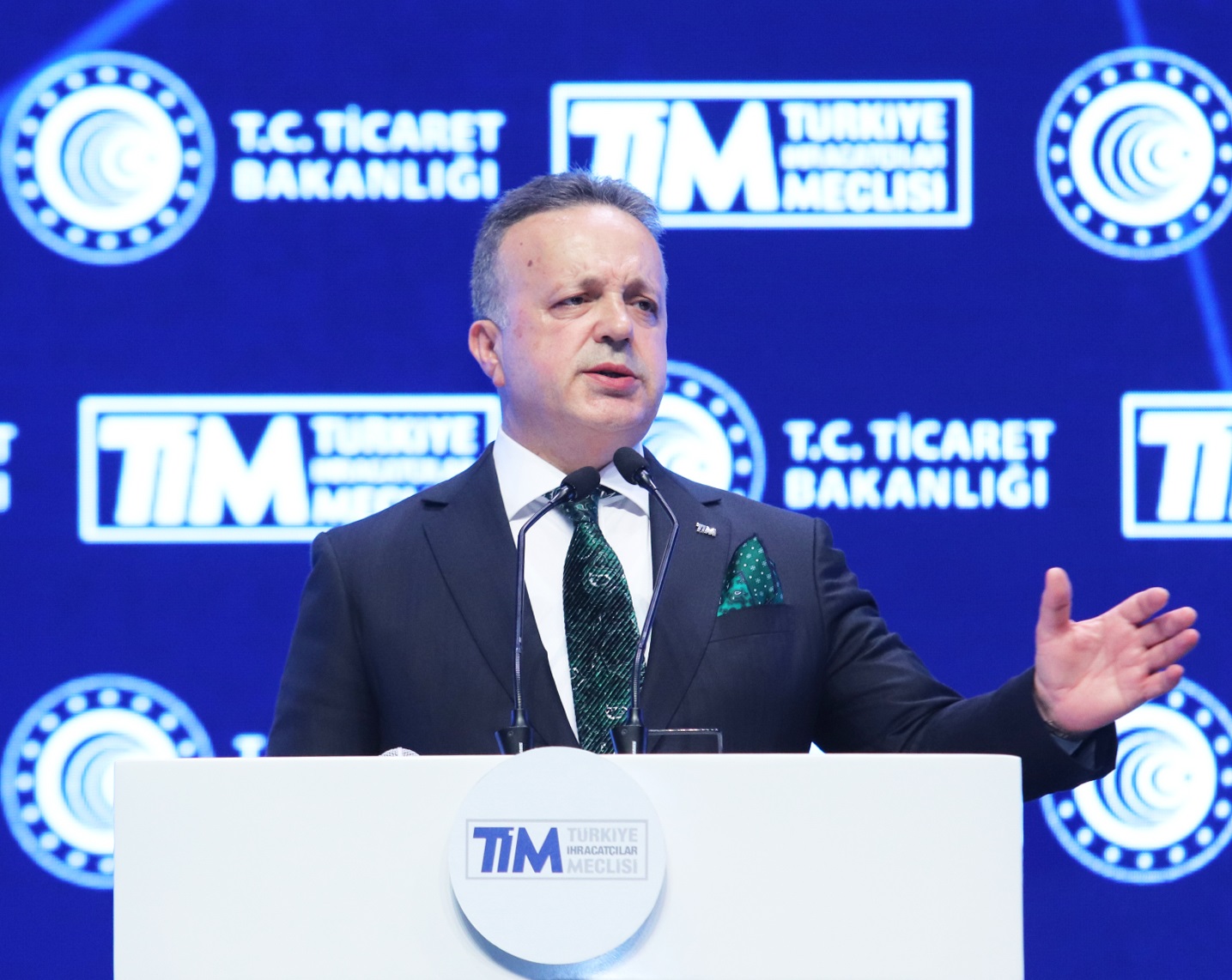 Trade Relations Between Türkiye And Hong Kong are Increasing

Noting that trade relations between Türkiye and Hong Kong have improved, İsmail Gülle, Chairman of the Turkish Exporters Assembly (TİM), said, "Our exports to Hong Kong increased by 92 percent in the last 10 years from $426 million in 2011 to $818 million last year. We imported 254 million dollars in 2020 from Hong Kong, the 47th market to which Türkiye exports the most. 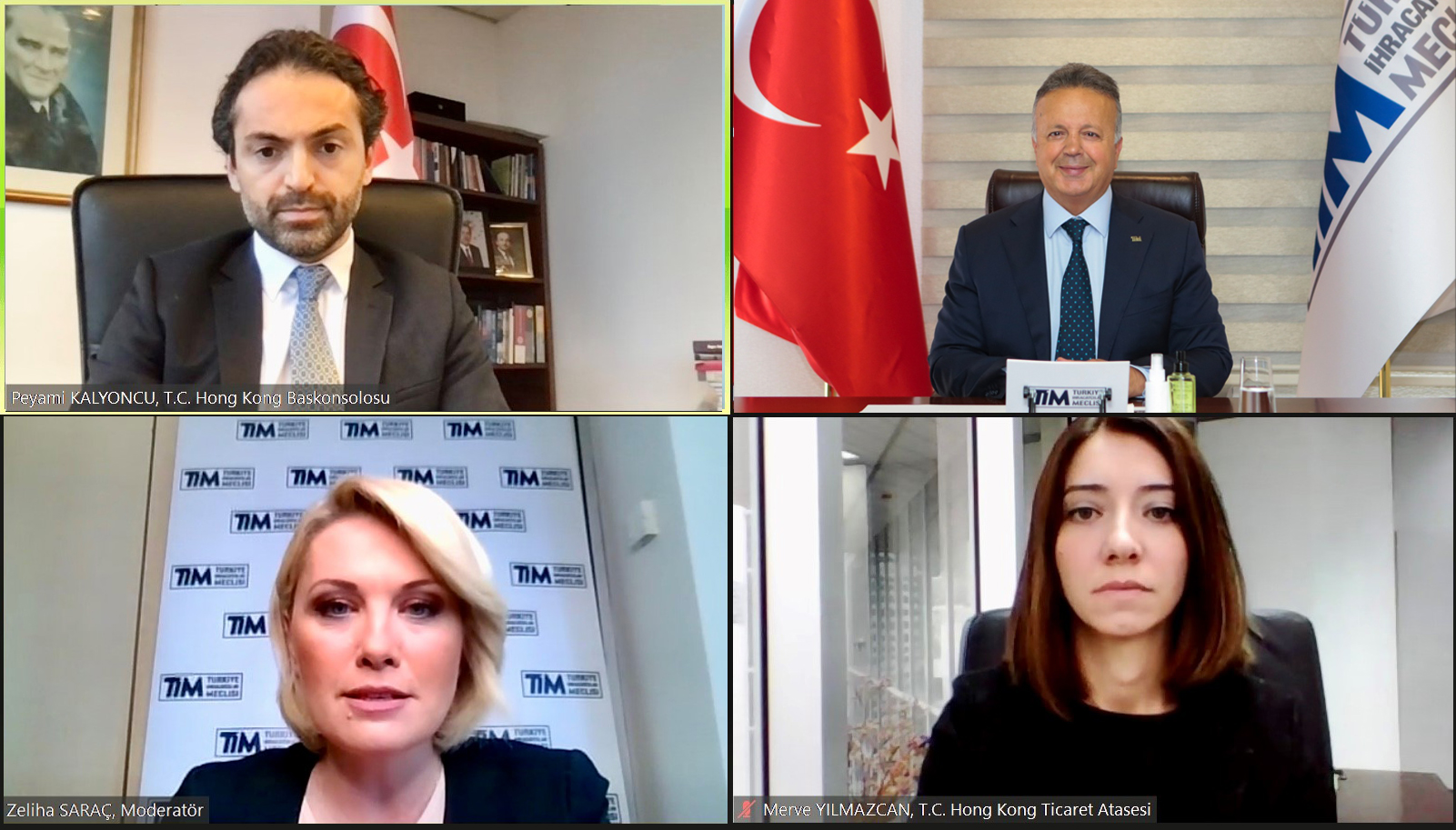 The Turkish Textile Sector Sustainability Action Plan was announced by Textile and Raw Materials Exporters' Associations under the leadership of Turkish Exporters Assembly (TİM). With the action plan, the Turkish textile industry aims to further increase its market share in global exports by providing a permanent transformation and complying with the European Green Agreement norms at a high level. TİM Chairman İsmail Gülle said, "I invite all our industrialists, manufacturers, suppliers, and exporters to a production approach that prioritizes nature and the environment. Let us renew the old infrastructure of our factories, separate the infrastructure of washing and dyeing water, recycle the washing water, expand the technologies that use less water in washing and dyeing, reduce the share of fossil fuels in production as much as possible.

A Perfect Record in Export 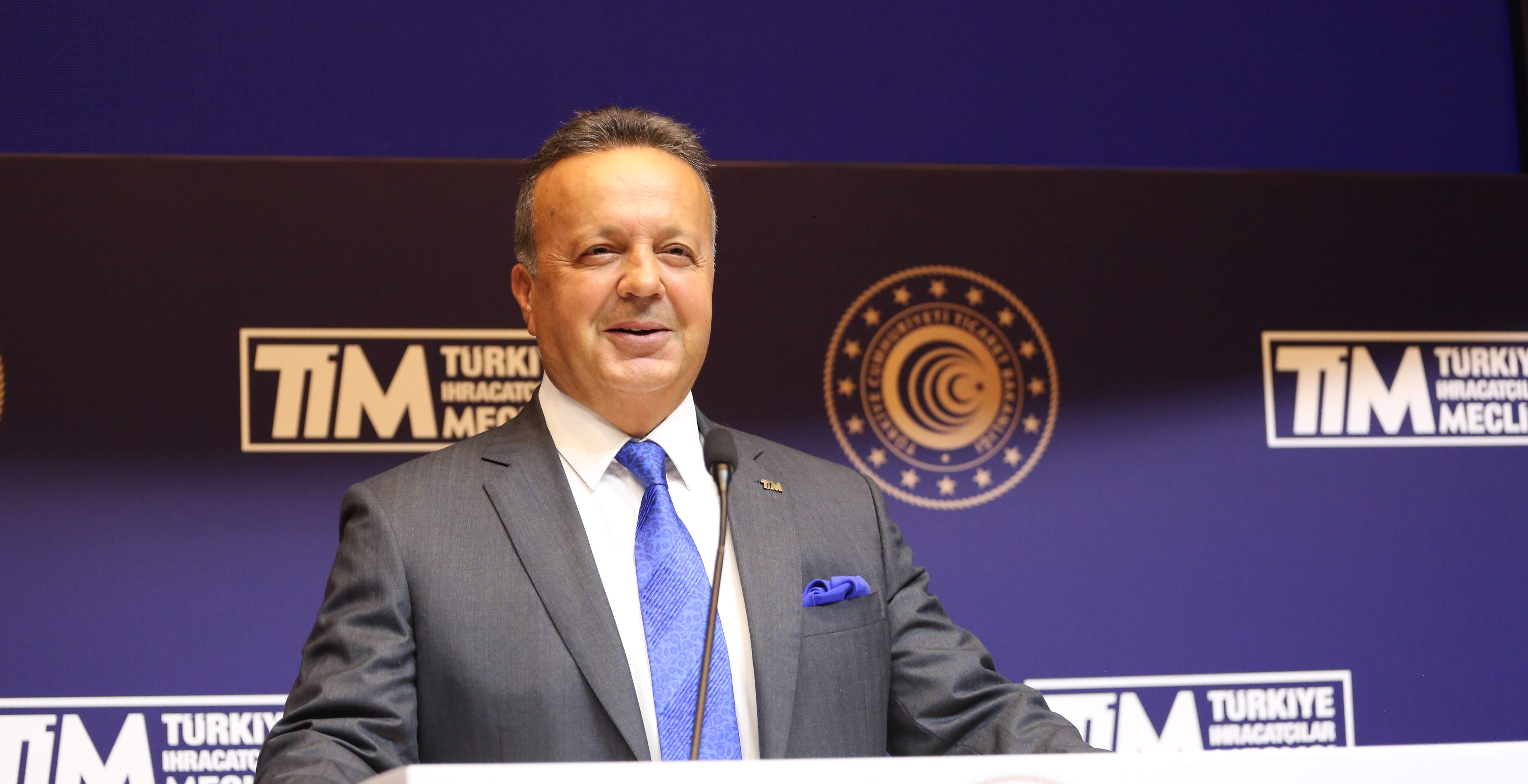 Sustainability Action Plan From TİM: We Produce For The World Without Consuming The World

Turkish Exporters Assembly (TİM) continues the projects that will carry Türkiye safely into the future. TİM's latest project; Sustainability Action Plan by 12 main objectives prepared under the leadership of the TİM Women's Council with the slogan “We produce for the world without consuming the world.”

A cooperation protocol (MoU) was signed between the Women's Council of Turkish Exporters Assembly (TİM) and the Independent Industrialists' and Businessmen's Association (MUSIAD) Women's to improve bilateral relations. The parties aim to improve partnership relations between employees and workplaces by the agreement. 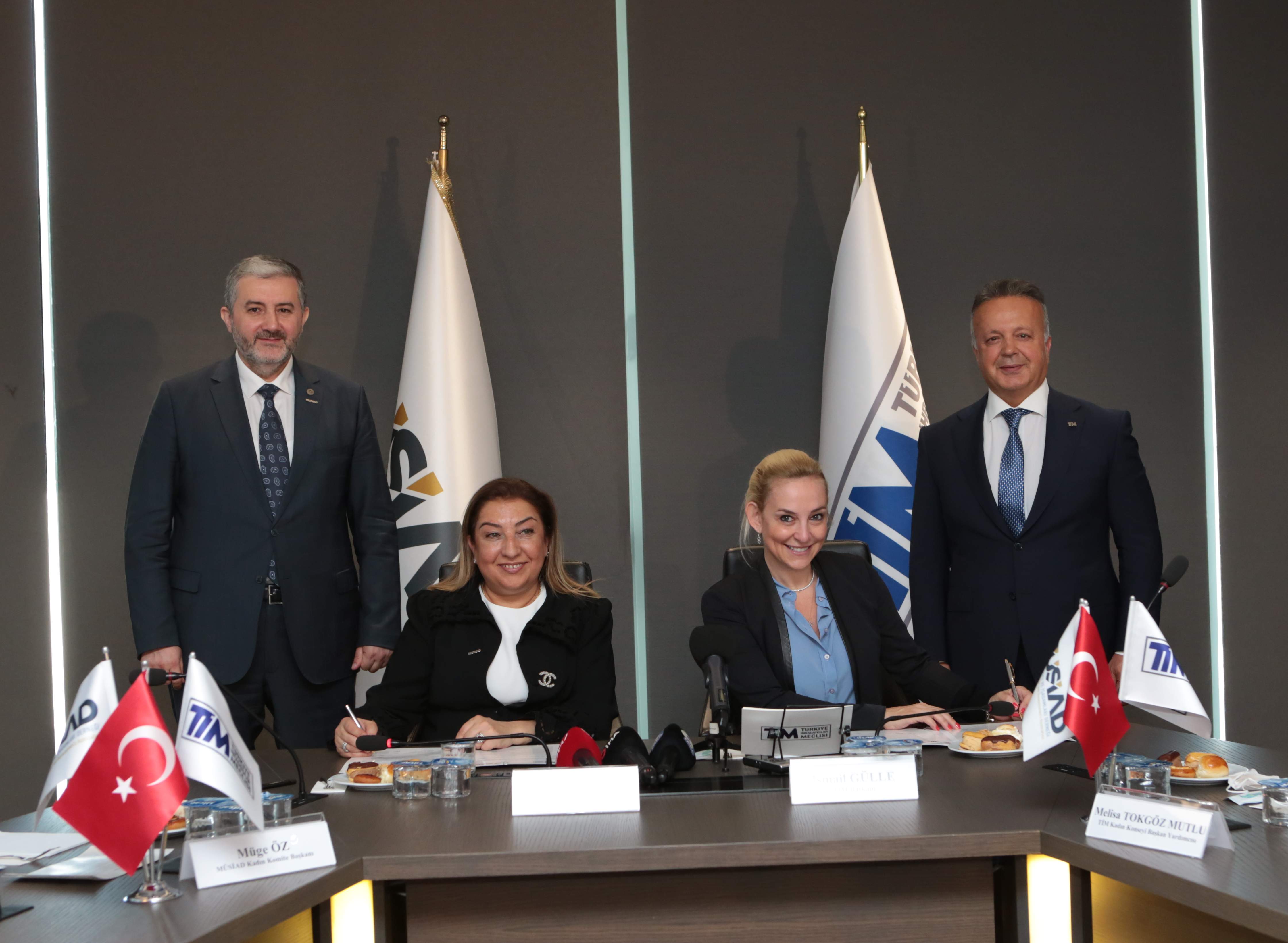 Monthly and last-12-month figures are calculated according to the general trading system.
Weekly export figures do not include exports exempt from Exporters' Associations, warehouses and free zone exports.

Be aware of recent developments and announcements related to Turkish Exporters Assembly and export in general
Türkiye Rising With National Industry Türkiye has strengthened the spirit of national unity and accelerate their domestic technology investments by eliminating the attempted coup of Fethullah Terrorist Organization (FETO) four years ago. Türkiye has succeeded in reducing its foreign dependency in many fields, especially in the defense industry, has also increased the exports of value added national technologies. Türkiye, demonstrated a successful crisis management during the pandemic also gave the message of being reliable supplier country. Third Largest Superyacht Builder in the World Türkiye, being one of the top three superyacht manufacturers of the world, continue to make a mark of itself with the superyachts it launches. Innovation awarded Sirena 88 has become an example of blending a century of experience and innovation. Dream Symphony is indicated to be the world's largest sailboat with 140 meters when completed and will be Türkiye's new “Falcon”. Hot Springs; Historical and Natural Richness Hot springs have been used as a source of healing since the early days of humanity, with even modern-day doctors prescribing patients to bathe in the sulfur-rich waters to help various health issues.
Read More

Türkiye is a Safe Haven

Türkiye has once again demonstrated that it is a safe haven. Global companies set their eyes to Türkiye once again.
İsmail GÜLLE / Chairman
Read More

The year 2019 was not a bright year for global economy and trade as you all know. It is forecasted that 2020 will not be nothing less than the previous year. International credit rating agencies have revised their forecasts downwards.
İsmail GÜLLE / Chairman
Read More

Export family that carries our industry on its back, never comes to the fore with problems and excuses but with solutions and records… LET 2020 BE THE YEAR OF TİM, THE YEAR OF YOU
İsmail Gülle / Chairman
Read More

We are working hard to grow out more designers from this land. We aim to transform the next Design Week into a valuable global design brand by bringing together all stakeholders of the design ecosystem.
İsmail Gülle / Chairman
Read More

We Returned From This Journey of Heart With Pride

Turkey has a lot more power than it is paid credit for. As a representative of Turkey's import family, we've taken action to use our force on behalf of our government and people. With the slogan of “Our troops are the backbone of our unity” we've dispatched our support team.
İsmail Gülle / Chairman
Read More

At TEKNOFEST, We Were Nourished by the Energy of Youth; WE GAVE THE MESSAGE OF INNOVATION TO THE FUTURE

At TEKNOFEST, We Were Nourished by the Energy of Youth; WE GAVE THE MESSAGE OF INNOVATION TO THE FUTURE
İsmail Gülle / Chairman
Read More

Despite The Waves Our Course Will Not Change

Moving our export target, which was 182 billion dollars at the end of this year, to 230 billion dollars in 2023, is our critical priority. Also, for 2030, we will continue to run for $ 400 billion.
İsmail Gülle / Chairman
Read More