Turkish Exporters Assembly (TİM) carried out its 28th Ordinary General Assembly and the "2020 Export Champions Award Ceremony" with the participation of President Recep Tayyip Erdoğan. The awards were presented to the top 10 companies that exported the most in Türkiye last year, by President Erdoğan. At the board, TİM also promoted the "Top 1000 Exporters of Türkiye 2020 Prestige Book" and shared the results of the research. According to this, the total export of the companies in the top 1000 were 92.6 billion dollars, and their share in total export was 54.6 percent. 78.9 percent of the top 1000 companies consisted of domestic companies. These companies accounted for 59.3 percent of the total export of the top 1000 companies. 57.5% of the top 1000 companies were in located the Marmara region. The province with the highest number of companies on the list in 2020 was Istanbul with 426. Automotive Industry accounted for 23.8 percent of the total export in the Top 1000 exporters list on a sector basis, Chemicals and Products for 10.7 percent, Steel for 10.5 percent, Ready-to-Wear and Apparels for 9.4 percent, and Electric-Electronics sectors for 8,4 percent. The top 1,000 exporters created a total of nearly 1 million jobs.

Export Family Meets With The Minister Of Trade

Turkish Exporters Assembly (TİM) Extended Board of Presidents Meeting was held with the participation of Trade Minister Mehmet Muş. TİM Chairman İsmail Gülle shared their work and their goals and expectations for the future at the meeting where the export family had the opportunity to convey their requests and suggestions to the Minister of Trade, Muş.

Turkish Exporters Assembly (TİM) has created a Sustainability in Industry Science Committee for the first goal of the "TİM Sustainability Action Plan", which it announced with the message "We Produce for the World Without Consuming the World". The Committee will work to guide exporters in line with the goals of Climate Change, Sustainability, and the European Green Deal.

Cooperation From TİM And THY To Break New Export Records

The scope of the cooperation agreement of the Turkish Exporters Assembly (TİM) with Turkish Airlines (THY) for discounted cargo transportation has been expanded to reduce the logistics costs of the exporter. According to this, in the air cargo discount campaign, the number of destinations was increased to 46, additional tone capacity was provided, the discount rate was increased, and product ranges were expanded.

TİM Women's Council, which was formed within the Turkish Exporters Assembly (TİM) to increase the number of women represented in the business world and to ensure the integration of female entrepreneurs into business life, met with Trade Minister Mehmet Muş in Ankara. During the visit, the Council had the opportunity to convey the roadmap and projects to Trade Minister Muş.

Gülle: Half of the Growth Came from Export

Commenting on the growth figures of the Turkish economy in the second quarter of the year, İsmail Gülle, chairman of the Turkish Exporters Assembly (TİM), said, "After growing by 7 percent in the first quarter of the year, we grew by 21.7 percent in the second quarter. It was the highest growth figure we reached in the 2000s. The contribution of export to growth was 10.8 points in the first half of the year. So, half the growth came from exports. These figures strengthened our belief that Türkiye will rise with export."

They Are Developing Domestic Solar Panels for Satellites

The center of the project, which continues to work in cooperation between the Turkish Exporters Assembly (TİM) and İstanbul Technical University (ITU), where multifunctional, domestic solar panels for Nano and Micro Satellites are developed, opened its doors to journalists. 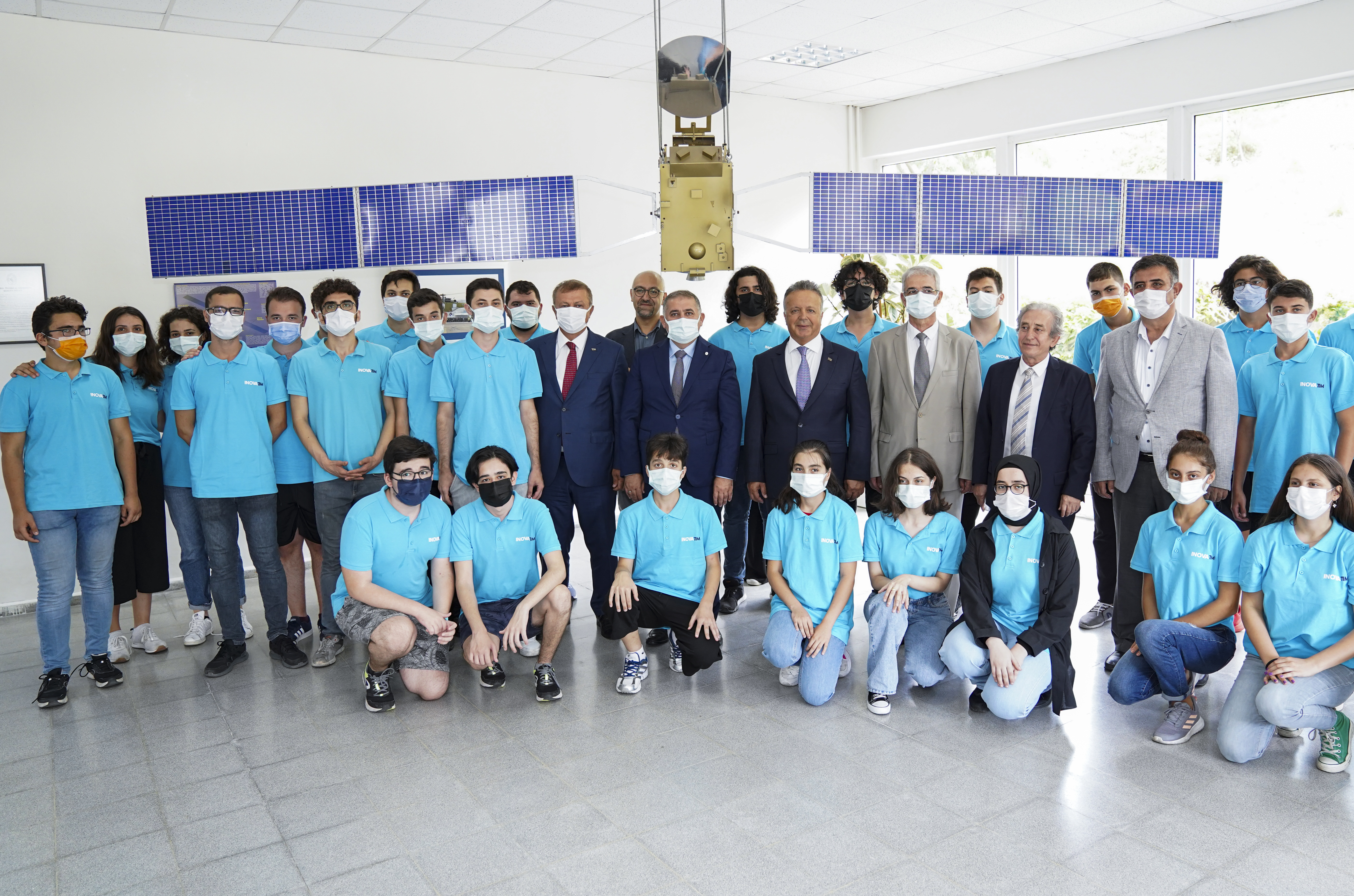 TİM Chairman Gülle: We Are Fourth In Natural Stone Export

Turkish Exporters Assembly (TİM) Chairman İsmail Gülle noted the success of the natural stone sector in exports in his speech at the opening of MARBLE İzmir International Natural Stone and Technologies Fair, which was held for the 26th time. Emphasizing that sector export exceeded $1 billion in the first half of 2021, an increase of 30 percent compared to the same period last year, Gülle said, "In the natural stone sector, we take an 11 percent share of the world's total exports. Our country is the fourth most natural stone exporting country in the world. In the first six months of 2021, the three countries where we exported the most processed natural stones were China with $326 million, the United States with $227 million, and France with $53 million in exports. During this period, our exports to 113 countries increased compared to the same period of the previous year."

Youth Power From TIM To Export

Turkish Exporters Assembly (TİM) has implemented the Young TİM project to increase the number of young exporters and to raise the young generation of the export people of the future. TİM aims to create Türkiye, which is rising with exports in the hands of young people with its new project. Young exporters from all sectors working in Türkiye's leading companies took part in Genç TİM. In the Young TİM Board of Directors, it was obligatory to have female board members at least as much as the ratio of the total female members.

Monthly and last-12-month figures are calculated according to the general trading system.
Weekly export figures do not include exports exempt from Exporters' Associations, warehouses and free zone exports.

Be aware of recent developments and announcements related to Turkish Exporters Assembly and export in general
Türkiye Rising With National Industry Türkiye has strengthened the spirit of national unity and accelerate their domestic technology investments by eliminating the attempted coup of Fethullah Terrorist Organization (FETO) four years ago. Türkiye has succeeded in reducing its foreign dependency in many fields, especially in the defense industry, has also increased the exports of value added national technologies. Türkiye, demonstrated a successful crisis management during the pandemic also gave the message of being reliable supplier country. Third Largest Superyacht Builder in the World Türkiye, being one of the top three superyacht manufacturers of the world, continue to make a mark of itself with the superyachts it launches. Innovation awarded Sirena 88 has become an example of blending a century of experience and innovation. Dream Symphony is indicated to be the world's largest sailboat with 140 meters when completed and will be Türkiye's new “Falcon”. Hot Springs; Historical and Natural Richness Hot springs have been used as a source of healing since the early days of humanity, with even modern-day doctors prescribing patients to bathe in the sulfur-rich waters to help various health issues.
Read More

Türkiye is a Safe Haven

Türkiye has once again demonstrated that it is a safe haven. Global companies set their eyes to Türkiye once again.
İsmail GÜLLE / Chairman
Read More

The year 2019 was not a bright year for global economy and trade as you all know. It is forecasted that 2020 will not be nothing less than the previous year. International credit rating agencies have revised their forecasts downwards.
İsmail GÜLLE / Chairman
Read More

Export family that carries our industry on its back, never comes to the fore with problems and excuses but with solutions and records… LET 2020 BE THE YEAR OF TİM, THE YEAR OF YOU
İsmail Gülle / Chairman
Read More

We are working hard to grow out more designers from this land. We aim to transform the next Design Week into a valuable global design brand by bringing together all stakeholders of the design ecosystem.
İsmail Gülle / Chairman
Read More

We Returned From This Journey of Heart With Pride

Turkey has a lot more power than it is paid credit for. As a representative of Turkey's import family, we've taken action to use our force on behalf of our government and people. With the slogan of “Our troops are the backbone of our unity” we've dispatched our support team.
İsmail Gülle / Chairman
Read More

At TEKNOFEST, We Were Nourished by the Energy of Youth; WE GAVE THE MESSAGE OF INNOVATION TO THE FUTURE

At TEKNOFEST, We Were Nourished by the Energy of Youth; WE GAVE THE MESSAGE OF INNOVATION TO THE FUTURE
İsmail Gülle / Chairman
Read More

Despite The Waves Our Course Will Not Change

Moving our export target, which was 182 billion dollars at the end of this year, to 230 billion dollars in 2023, is our critical priority. Also, for 2030, we will continue to run for $ 400 billion.
İsmail Gülle / Chairman
Read More