The “Strong Women of Export” award ceremony, organized for the first time by Turkish Exporters Assembly (TİM), carried out many projects in order to increase the number of female exporters in Türkiye and to make women more effective in the business world, was held with the participation of First Lady Emine Erdoğan, Minister of Treasury and Finance Mr. Nureddin Nebati, Minister of Industry and Technology Mr. Mustafa Varank. Awards were presented to our successful female exporters and export champion companies at the ceremony.

Speaking at the award ceremony, TİM Chairman İsmail Gülle said, “Our women are achieving very important successes in production and export as the locomotive power and guarantee of the unity and solidarity of our country, national sovereignty, and bright future, as in the past. The golden key to carrying Türkiye to a stronger and more prosperous future, to moving Türkiye to the economy giving “Foreign Trade Surplus”, and to carrying Türkiye in the top 10 economies is in the hands of our women. As Turkish Exporters Assembly, we are proud to support our female entrepreneurs. Because we believe that our women will be the architects of Türkiye, which is rising with export.”

Turkish Exporters Assembly (TİM), the only umbrella organization of more than 100,000 exporters with 61 Exporters Association and 27 sectors, continues its efforts to increase the number of female exporters and entrepreneurs in our country and to improve women's employment in the business world. In this context, our successful exporter women received their awards with the “Strong Women of Export” award ceremony organized by Turkish Exporters Assembly (TİM) for the first time. The awards were presented to our female exporters and the most exporting companies on a sectoral basis by First Lady Emine Erdoğan, Treasury and Finance Minister Nureddin Nebati, Minister of Industry and Technology Mustafa Varank, and TİM Chairman İsmail Gülle.

In his speech at the ceremony, TİM Chairman İsmail Gülle stated that Turkish women, who gained the right to elect and be elected in 1934 long before the leading countries of the world, achieved very important successes in production and export as the locomotive power and guarantee of Türkiye's unity and solidarity, national sovereignty and bright future as in the past.

“Our women are indispensable in Türkiye's struggle for 'sustainable' development”

Stating that the increase in the representation rate of our country's women in parliament from 4.5 percent to 17.4 percent, especially in the last 20 years, the reformist steps taken to strengthen women economically, culturally, and socially, as well as the energy and motivation provided by women's effectiveness in the business world, constituted one of the most important pillars of the process that makes Türkiye a priority in the world economy and politics, TİM Chairman İsmail Gülle said, “The fact that our women are educated, professional, strong and conscious means that Türkiye is one step closer to its goals. For this reason, the leading role of our women in business life is an indispensable element of Türkiye's struggle for 'sustainable' development as well.

“The courage and extraordinary dedication of our thousands of women have enabled the rise of a nation.”

Indicating that the courage and extraordinary dedication of thousands of women in Anatolia has enabled the rise of a nation, under the conditions of a country that survived the occupation in the first years of the Republic, lost most of its population in wars, lost its young people in their most productive age, and was unable to export, TİM Chairman Gülle added, “Sabiha Gökçen inspires today's women by taking them to the skies. Fatma Aliye, Türkiye's first female philosopher and novelist, shed light on the world of science. The contribution of Turkish women, who had the right to elect and be elected long before the countries we call civilized society, to employment was reaching the level of 46% in a short time. She was becoming a mother, was raising new generations, and was working in the fields and factories. Türkiye, which had foreign trade surplus and budget surplus even under the harsh conditions of those days, was being built with such a sublime struggle.

“The world was applauding the efforts of women not only in industry but also in politics, trade, banking, justice, art, sports and many other fields to move Türkiye beyond the level of civilizations.”

“In the last 20 years, we have come a long way in women's employment and women's participation in the economy.”

Emphasizing that in the last 20 years, it came a long way in women's employment and women's participation in the economy with the joint works and projects of the government, non-governmental organizations and the private sector, TİM President İsmail Gülle said, “In this period, the rate of our female professors has increased from 24 percent to 32 percent and the rate of participation to the workforce from 26 percent to 34 percent. Türkiye is one of the countries with the least pay gap between male and female employees. In our country, the proportion of venture capital firms with at least one female partner reached 22 percent, the ratio of startups with founders or partners to all startups reached 14 percent, and the ratio of enterprises whose employers are women to total enterprises reached 10 percent. The proportion of women on boards rose to 17 percent and the number of female members increased by 5.3 percent. Because international research shows that women's participation in the workforce improves the living standards of families, employees, and societies.”

Stating that they see that women's contribution to the economy is higher in countries where the ratio of international trade to national income is high and which has a high share of global trade, TİM Chairman İsmail Gülle said, “Therefore, the golden key to carrying Türkiye to a stronger and more prosperous future, to moving Türkiye to the economy giving “Foreign Trade Surplus”, and to put Türkiye in the top 10 economies is in the hands of our women.”

TİM Chairman İsmail Gülle, who stated that they shared the annual foreign trade figures with the public with the presence of President Recep Tayyip Erdoğan on January 3rd, said that they were proud of a historic day for the Turkish economy and that the valuable representatives of the export family reached the annual export level of 225 billion dollars as a result of their superior efforts and efforts. TİM Chairman İsmail Gülle said, “Our strong export performance continues in 2022. In January, our export increased by 17 percent compared to last year and by 25 percent in February. In the first two months, our export exceeded 37 billion dollars. We are moving forward with certain steps as an export family to both the $250 billion target set by our esteemed President at the beginning of the year and the goal of 'Türkiye with a Foreign Trade Surplus'.”

TİM Chairman İsmail Gülle said, “We believe that the role of our women is very important in the road to these goals. With this consciousness and awareness, we established TİM women's council with the slogan 'Strong Women, Strong Export, Stronger Türkiye'. Our Council continues to work with the aim of increasing the number of female exporters and entrepreneurs, improving women's employment in the business world, and ensuring that more women are represented in non-governmental organizations. In December 2020, we presented our roadmap and projects to our council members. Since then, our TİM Women's Council has signed important projects in a short time.”

“As a result of our work, the Foreign Trade Complex, which is the epicenter of our export, was awarded the Zero Waste Certificate”

Stating that under the auspices of First Lady Emine Erdoğan, the Zero Waste project started and that the TİM Women's Council initiated the 'Zero Waste in Export Project' with the awareness of environmental problems, TİM Chairman İsmail Gülle said, “As a result of our work, the Foreign Trade Complex, which is the epicenter of our export, has been awarded the Zero Waste Certificate. In addition to bringing waste into the economy, we also gave 'Zero Waste Awareness Training' to our staff. We have prepared the TİM Sustainability Action Plan, which we have worked on carefully, with the slogan 'To produce for the world without consuming the world'. We established the Sustainability Science Committee in TİM Industry, the first of our 12 main objectives set out in the action plan. We continued our work on sustainability on a sectoral basis. We have prepared the Textile Sustainability Action Plan in order to ensure a permanent transformation in the Turkish textile sector and to ensure high-level compliance with the norms of the European Green Agreement. We will also announce our Agricultural Sectors Sustainability Action Plan this month.”

“The architects of Türkiye rising with export will be our women”

Speaking about their environmental projects as well as their work for female exporters, TİM Chairman İsmail Gülle said, “We organized trade delegations for our female exporters. We started this work with the delegation we organized for the Netherlands in 2019 and did not take a break during the pandemic period. We moved Türkiye's first Female Exporter Virtual Trade Delegation to Latin America and Africa. In this context, we organized Virtual Trade Delegations in Chile, Peru, Colombia, Mexico, South Africa, Nigeria, Kenya, and Tanzania. At our Women Export Talks events, our female exporters who added value to our export told their success stories that will inspire all women. With our Women Entrepreneur Experience Programs, we mentored 170 female entrepreneurs in TİM-TEB Enterprise Houses. Our female entrepreneurs in our Enterprise Houses received more than 60 million Turkish Liras of investment. In addition, we have carried out training programs for women and young entrepreneurs in Northern Cyprus. In addition, in cooperation with the U.S. embassy, we organized the Women Techno Entrepreneur program for the first time in our country. Our female entrepreneurs, that we support, export products and services to dozens of countries today. Among them is the establishment of Türkiye's first and only domestic propolis plant, which produces a new generation of electric bicycles, recycles olive waste, and produces bio-plastics. As Turkish Exporters Assembly, we are proud to support our female entrepreneurs. Because we believe that our women will be the architects of Türkiye, which will be rise with export.”

Saying that in the place, where our women touch, roses bloom, it become gardens, carries out production, and ultimately becomes 'Türkiye Rising with Exports'”, TİM Chairman İsmail Gülle said, “Recently, we have been proud of the achievements and medals of our female athletes at the Olympic Games. In the fight against the global pandemic, we were proud of Özlem Türeci, the Turkish female scientist who found the Covid vaccine. We are proud of our Turkish women who are on the list of the most powerful women in the world. In this period when we are in a new struggle both in the economy, politics, and foreign policy, we wanted our whole country to know our heroic female exporters and be proud of them. And today we will reward our successful female exporters by saying 'Skills are subject to compliments'.”

“The export is rising with our women, Türkiye with export!”

Pointing out that today's ceremony is a reward, and encouragement about the future, as well as a message to Türkiye and the world, TİM Chairman İsmail Gülle concluded: “The fact that we are under the auspices and presence of the Honorable First Lady also increases the power of this message. I would like to thank her for being among us today and honoring us. In addition, I would like to express my gratitude to the Esteemed President and our government for their support to our export family. The export is rising with our women, Türkiye with export! I firmly believe that we will achieve our goal of 'Türkiye, which gives foreign trade surplus', with the tenacity and consistency of our women.”

Organizations that receive the awards by exporting most on a sectoral basis: 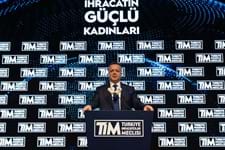 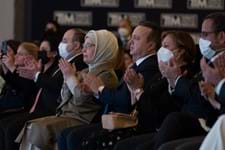 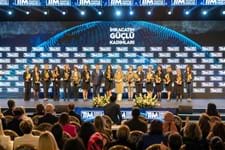