In the opening speech of the TİM Denizli Assembly program, TİM Chairman İsmail Gülle said, “We have achieved successful results with the interest of our province in export. In the last 20 years, our city's export has increased 11-fold. In 4 years, Denizli's export increased by 50 percent and exceeded 4.5 billion dollars. Last year, 14 sectors in Denizli made the highest exports in their history. Our province set an export record for 64 countries in 2021. In 2022, Denizli exporters continue to achieve new successes. In the first 2 months of the year, the exporters of our province exported 730 million dollars with a 19 percent increase.”

Turkish Exporters Assembly (TİM), the only umbrella organization of more than 100,000 exporters with 61 Exporters Association and 27 sectors, continues its efforts at full speed to reach its target of 250 billion in 2022. Turkish Exporters Assembly (TİM), which carried out the Southeastern Anatolia Assembly program with the strong participation of regional exporters in Gaziantep last month, met with the export family in Denizli at the meeting of the TİM Denizli Assembly.

In the opening speech of the meeting, saying that Denizli is a role model for all Anatolia in development, TİM Chairman İsmail Gülle stated that although it has strong economic centers such as İzmir and Manisa in its immediate vicinity, Denizli has managed to become a new generation industrial center.

Denizli's export has increased 11-fold in the last 20 years

Stating that Denizli reads Türkiye's development very well and puts export at the center of the business, TİM Chairman İsmail Gülle said, “In the last 20 years, the exports of our city have increased 11 times. When we took office four years ago, our exports were $164 billion that day. Our number of exporting companies was 65 thousand and our export load was 115 million tons. Denizli's exports were 3 billion dollars and the total number of exporters was 1100. Since then, our exports have increased to 225 billion dollars in 4 years. Our number of exporters exceeded 100 thousand. Our export load reached 174 million tons. Denizli's exports increased by 50 percent to more than $4.5 billion. The number of exporters in Denizli has increased to 1,500. Denizli became the ninth most exporting province with these figures.”

“Our province set an export record for 64 countries last year”

TİM Chairman İsmail Gülle stated that steel sector exports in Denizli have increased by 100 percent, iron, and non-ferrous metals by 95 percent, chemical substances by 92 percent, electronics by 68 percent, and textile sector exports by 29 percent in the last 4 years. In addition, our province set an export record for 64 countries last year.  2021 was the year of exports in Denizli in every sense. In 2022, our Denizli exporters continue to achieve new successes. In the first 2 months of the year, the exporters of our province signed $730 million in exports with an increase of 19 percent.”

“By establishing a sustainable system in export, we will create better tomorrow for future generations”

Stating that 2022 will be a year in which they will witness the change in many senses, TİM Chairman İsmail Gülle continued his speech: “As Turkish Exporters Assembly and Exporters' Associations, we are in this change. Because of the rise in our export, we are now in a new league in global trade. In the new period, we are creating both our strategy and our perspective on exports with an understanding that will increase the quality as well as quantity. By establishing a sustainable system of exports, we will create better tomorrow for future generations.  We have laid the foundations for the projects that will form the infrastructure for this. TİM Brand Council, which we established last year, started projects that will serve the brand value of our exports and our country. In addition, the TİM Women's Council, which we established to ensure the effective participation of our women in the economy and export, continues its activities for women exporters and entrepreneurs with an intensive agenda. It organizes virtual and physical trade delegations specifically for our female exporters. We bring our female exporters together with buyers all over the world. In addition, we have established Young TİM in order to train the exporters of the future today. In a very short time, the Young TİM has reached more than 600 members. The number of young members from Denizli is 34. Also, we have created the TİM Climate Committee to anticipate all the opportunities and risks that may arise with the awareness of the reality of climate change.”

“276 companies from Denizli exported for the first time this year”

Emphasizing that sectoral action plans have also been implemented one by one after the TİM Sustainability Action Plan, TİM Chairman İsmail Gülle said, “Following our Textile Action Plan, which we announced in June, we also announced the Agriculture and Livestock Sector Sustainability Action Plan last week. In addition to these projects, we continued our efforts to increase the number of exporter companies without slowing down.  We meet with our companies from all over Anatolia within the framework of our TİM SME Export Mobilization training program.”

Noting that they have moved their programs to Denizli in 2020 to bring new participants to the export family by evaluating Denizli's great potential, TİM Chairman İsmail Gülle stated that they had successful results with the interest of Denizli export. TİM Chairman İsmail Gülle said, “276 companies from Denizli exported for the first time this year. Denizli exporters also achieve significant success in our innovation projects.  47 companies from Denizli participated in Türkiye's first innovation development program InovaLİG 2020. 5 of these companies have obtained a degree. We continued to support Denizli youth and entrepreneurs within TİM-TEB Enterprise House, the largest entrepreneurship family in our country. So far, nearly 600 students have graduated from the "Wake Up" and the "Lets Up" programs. 138 entrepreneurs were supported.”

Saying that another important work that contributes to increasing the number of exporters and market diversity is trade delegations, TİM Chairman İsmail Gülle said, “Despite the pandemic, we brought our exporters together with other exporters with 100 virtual and 15 physical trade delegations in 74 countries. This month, we saw in our delegations in Israel and Spain that buyers have a serious interest in Turkish products.  This interest pleased us greatly and made us even more excited for the upcoming period. In addition, there is strong participation from our exporters in the Turkish Logistics Portal, which we launched in October. In the portal, which we have set up as a digital bridge between exporters and the logistics sector, more than 2,000 companies started to receive services as registrations in a very short time. With the developing structure of our Turkish Logistics Portal, we believe that it will make much greater contributions to our export. We invite our regional exporters and logistics companies to become members of the Turkish Logistics Portal, which we have created with our resources.”

“We will also solve the collateral issue, which is a common problem of our exporters”

Saying that the Export Development Joint Stock Company, which exporters looked forward to, started to operate on March 1st, TİM Chairman İsmail Gülle said, “Mr. Kasım Akdeniz, General Manager of İGE A.Ş., which will play a critical role in solving the collateral problem, is among us today. Thanks to İGE A.Ş, which was created by our exporters with their own resources, our exporters will no longer have to give mortgages to the bank their real estate and fixtures to get a loan. Thus, we will have solved the collateral issue, which is the common problem of our exporters.” 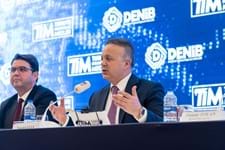 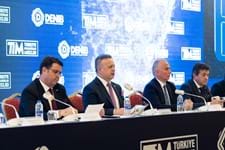 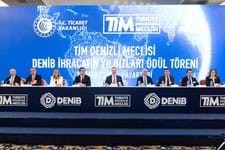